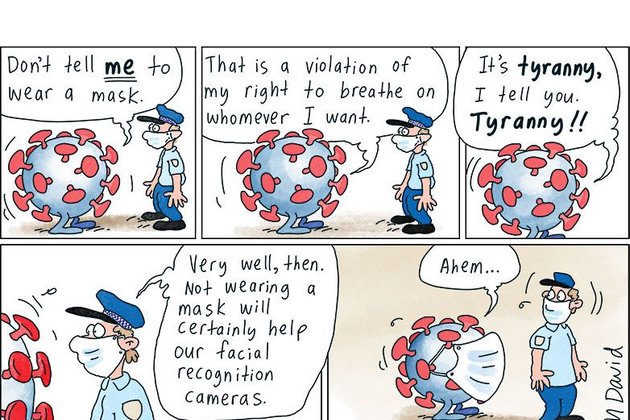 Countries successfully controlling the coronavirus are in all regions of the world, although under-represented in the Americas. Alan Austin examines the latest data.

THERE are 80 major countries that now have the coronavirus suppressed or controlled, though few if any have eliminated it. We know this by counting infections and deaths worldwide for the month of July, just ended.

Of these 80, 27 countries recorded no July deaths at all, eight recorded just the one death, nine recorded two and the other 36 three or more. All kept deaths per million population below three - which is our definition of "success". (Data is from Worldometers, here.)

Major developed countries (populations above 300,000 and classified as highly-developed by the UNDP) with zero deaths in July were New Zealand, Iceland, Estonia, Taiwan and Cyprus. Two of these, New Zealand and Taiwan, can almost claim elimination - with just 20 and 19 active cases respectively. The other three have active infections above 48 per million inhabitants, so have the virus controlled but not yet eliminated.

Advanced countries with fewer than one death per million in July were Japan, Malaysia, Norway, Singapore, South Korea, Finland, Slovakia and Lithuania.

Altogether, the 29 countries in North, Central and South America - with just 12.9% of the world's population - accounted for 64% of all July deaths.

The six largest American countries by population experienced these deaths in July:

Given that about a dozen countries within an easy drive of Lombardy, Italy, were devastated by the first wave of the pandemic in February and March, Europe has recovered remarkably well. Cyprus, Estonia, Iceland and Malta recorded no deaths in July. Finland and Slovakia had just the one, and Georgia, Lithuania and Latvia, two. Altogether, 18 European states recorded fewer than three deaths per million.

One notable success story is Spain whose fatalities have plummeted. From 8,464 deaths in March and a disastrous 16,079 in April, deaths eased to 3,487 in May, fell to 325 in June and tumbled further to 90 in July. Control is possible. Felicidades!

Of the 80 nations which have kept deaths low, the largest group - 31 countries - is in Africa. Caution is required as many of these have poor health facilities and limited capacity to record outcomes accurately. So infection and death rates may be higher than official statistics reveal. Nevertheless, grave fears at the outset that there would be millions of deaths across Africa have not been realised.

Australia finds itself outside the top 80 countries for July because of the spike in infections which began in Victoria on 3 July. Total deaths in Australia in July were 93, up from ten in May and just two in June. That was 3.64 deaths per million.

Two states have near-identical populations, land area, climates, geography, demographics, economies, systems of government, social development and health care facilities. They are Arizona in the USA and Victoria in Australia.

Administrations in both states watched from a safe distance the COVID-19 outbreak in Wuhan, China, late last year, then observed the explosion of infections in the European countries surrounding Italy.

They observed the infection arrive on their own continents at the same time. The first death in Australia was in Perth on 1 March - the day after the first U.S. death, in Washington State, on 29 February. Victorians and Arizonans then watched the disastrous initial impact in distant states - in New York, USA and in Sydney, Australia. So both had time to prepare responses.

Tragically, the virus did arrive in these two states, causing the first deaths within a few days of each other in late March. Since then, however, outcomes have been vastly different.

Victoria certainly must heed the messages arising from the recent surge of cases - many of which are carefully analysed here by IA's Dr Binoy Kampmark. The State Premier's response has been the strictest of all the states from the onset of the virus. But things could get much worse. And may yet be.

Coronavirus unveils all: Aged care and the Victorian crisis

The response to the COVID-19 pandemic has revealed poor management within the aged care sector.

The entire global economy is being hurt by this pandemic. Of the 113 economies which have posted their annual gross domestic product (GDP) this year, 52 recorded negative economic growth - that is, an actual decline in GDP - in the March quarter. Another five have already recorded negative annual GDP growth for the June quarter.

We must await the results of the rest of the world for June. But, so far, only Vietnam and China appear to be avoiding recession.

Fortunately, unemployment is not quite so bleak. Jobless rates have barely budged in those countries which have managed the virus well, and even in some which haven't.

Japan, Mexico, Switzerland, Czechia and 42 other countries all still have the jobless rate below 4%. Another 37 have it below 6%. Of these, several have actually reduced the jobless rate over the last year, including Indonesia, Mexico and Saudi Arabia.

It is too early to assess the pandemic's overall economic impact. But it is clear that decisions made by each administration will largely determine success or failure.

The negative lesson from Australia is that this is an unpredictable enemy, requiring constant vigilance. The positive lesson - which Arizonans and most other residents of the Americas may wish to ponder - is that collaborative efforts by states, federal authorities and the community based on the science can keep the harm well below that experienced where this is not in place.

Morrison cancels Parliament due to COVID-19 - and Dan Andrews

Concerned about lack of government accountability as Parliament shuts down Well, that's because of COVID-19. And also, Daniel Andrews, naturally.

Alan Austin's defamation matter is nearly over. You can read an update HERE and help out by contributing to the crowd-funding campaign HERE. Alan Austin is an Independent Australia columnist and freelance journalist. You can follow him on Twitter @AlanAustin001.